BACK TO THE FIRST RULE

The more you read, the more you get the feel for how a story is structured. An exercise I learned in a workshop was to pick up a book you’ve read and open it to the middle. There should be a major turning point in the story. I’ve often found it to be true, no matter if the book was about 200 pages or 870 pages.

Think about your favorite books. Where are the turning points? When do they occur? Open one up and see if there is a major one in the middle. Doing this helps you to know where to put them in your own story. No wonder the first rule of writing is “read, read, read.”

POSTCARDS FROM THE MUSE

Lately, something has happened to me that I crave to happen constantly. I am consumed by a story. This story popped in my head a couple of years ago while listening to a song on my play-list. This song is on an album I had as a teenager and I wore it out listening to it so much. Now, as an adult with the ability to purchase electronic forms of music, I found the album on-line and bought it. So all the songs were familiar old friends.

But when this particular song played, it was more than just remembering how much I liked it back in yore. A seed opened up and a root shot out into my mind. I had to hear the song again, and again, and again, over and over. The root grew a stem, the stem grew leaves, and a bud began to open. And all the while, the roots took over more and more of my mind.

I am now so consumed by this story growing that every thought I have goes back to the song.

Congratulations. You have just received a postcard from the muse.

For my last blog concerning plots, I wanted to summarize the Snowflake method created by Randy Ingermanson.

1.  Write a one-line summary of your entire story

2.  Expand your one-line summary into a paragraph

3.  Write a one-page summary for each major character

4.  Expand each sentence of your one-line summary into a full paragraph (about one page)

5.  Expand your one-page plot summary into a four-page synopsis

7.  Continue expanding your synopsis by creating individual scenes (a program such as Excel will help)

I hope this helps in your writing!

Sometimes a story gets ahead of us.  The ideas have come so quickly we try to push them into the opening pages. I recently read a mystery and before the end of the first chapter I knew the villain. The ending had no surprise. A mystery and even a romance should allow the reader to speculate and theorize. There should be room for the “eureka” moment.

Of course we need to provide hints and clues, but they need to be subtle. There should be shadows and secrets that reveal themselves at the climax. The revelation should lead to a satisfying ending that ties all the loose strings. The journey should keep the reader guessing until just the right time and place. We should want the reader to shake his head and think, “I wasn’t expecting that.”

Techniques to help develop a plot

1. Write a synopsis of your story

2. Outline your story by Chapters

4. SOTP – Seat Of The Pants writing where you draw the map as you travel

Remember, Plot is the map of the story and not the story. It is the overarching outline that you fill with all the story details.

Find the method that helps you write your story.

Do you have an idea the ending before you start writing?

Are you a total pantser, allowing the characters to take you on their journey and realize the ending when you get there?

My brain does not work in pantser mode, I’ve discovered, after a workshop with Kathleen Baldwin, who explained the difference. I work with numbers and deadlines at the day job, and for the time I have at the keyboard writing, I like structure. My characters are well defined and I have a general idea of the ending; then I can begin writing.

The final scene is the big yellow ribbon on  your plot. It ties up the story in a satisfactory way for your readers and answers all of their questions. Make it big, make it bold, play that last climactic scene for all its worth.  This is your ultimate test, proof that the main character is worth their time and worth saving.

So the questions come up when new writers look to begin their first work: How do you write a story?  Do you begin at the first and then just plug away?  Do you organize all of your scenes first and then write it?  What’s the best way?

Guess what folks.  It really depends on the writer and their preferences.  I will say that there are pros and cons to each. Let’s examine the two prevailing methods.

Try out both methods and see which you prefer.  Happy writing!

Have you ever started reading a story and when you reached the end, it was a real let down?  Good plots lead to a satisfying ending.  No one wants to read a romance only to find the hero and heroine separate at the end. Rule number one of a romance is to have a happy ending. But when Prince Charming leaves Cinderella with a peck on the cheek and a “see you later”, we’re not satisfied.  And chances are we will not purchase another book by that author.

A good story catches the reader within the first few pages. It maintains a rhythm that builds to a climax and then begs for a resolution. It’s spiced with twists and turns that challenge the characters. The obstacles force the hero to grow and become stronger. And in the end the questions are answered and the hero is able to build a life beyond the troubles and trials of his past.

Sometimes the writer’s journey is really difficult. A promising story falls apart. I write my characters into corners and can’t find a way to get them out without the story seeming contrived. Good writing requires patience and an open mind. It doesn’t happen overnight. I am currently reading an early Nora Roberts release. It’s fun and I am enjoying it.  But the real thrill is seeing how she has continued to hone her talent and find new stories to tempt the reader.

We’ve all heard of the Story arc or Plot Mountain, here is another way to look at the “plot” in your story. 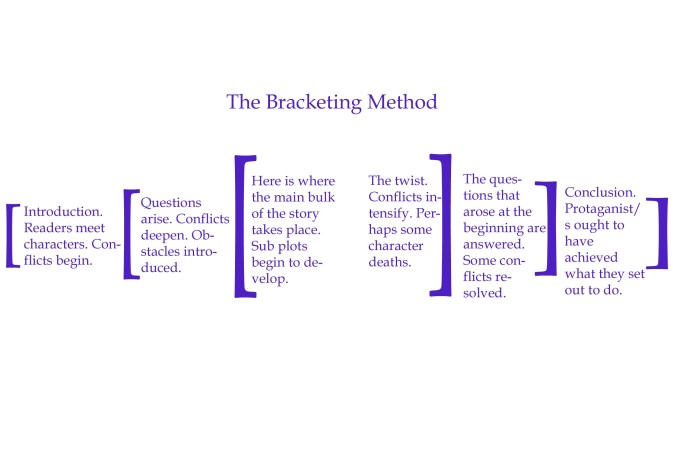 At a writer’s conference held on the campus of WTA&M University in Canyon, Texas, award-winning author Dusty Richards talked to us about scene and sequel when plotting. This is the method that he used to write his popular Byrnes Family Ranch series.

Every scene starts with:

The story goal in the scene can be stated through dialogue beforehand, internal dialogue through character thought, or stated in the opening line of the scene.

What happens next is the sequel. The pattern of sequel is:

More on scene and sequel next week.

Follow us all month long as we blog about Story Plot. Happy writing!